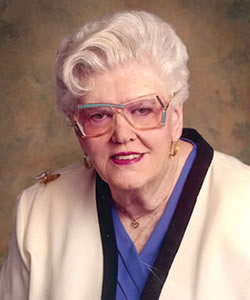 Margaret B. Growney was born in Wilkensberg, Pennsylvania and moved to Florida at an early age. She served in World War II as a civilian in Army Counterintelligence then enlisted in the military working in Naval Intelligence.

Ms. Growney is a graduate of Stetson University and received her Juris Doctorate from Stetson University College of Law. She began her legal career in 1951 as a general practitioner. She then concentrated her practice in probate law upon founding the Law Offices of Growney, McKeown & Barber.

She has been active in civic, legal, and professional organizations throughout her career. She was recognized in Who’s Who of Florida and Personalities of the South. Ms. Growney retired in 2002 after practicing law for 51 years. In 2018, Margaret Berg Growney passed away at the age of 99.